Get Ready for Snow Season in Parker Colorado 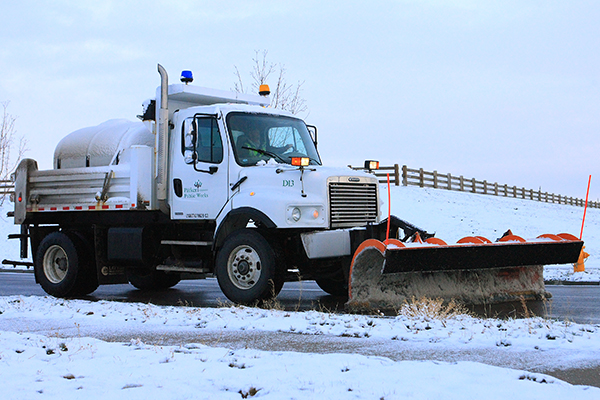 It is the Town’s goal to provide the best snow service possible within the constraints of budget, personnel and available equipment. Keep in mind that Parker Road/State Highway 83 is maintained and plowed by the Colorado Department of Transportation (CDOT) rather than the Town.

Although the Public Works Department has a snow plowing priority system in place, the time required to clear the roads depends several variables such as the snowstorm intensity, duration, wind and the temperature. The Town of Parker see approximately six feet of snow during an average snow season which is typically spread over several dozen snow events. Arterial roadways are our first priority and will be cleared first. These are the major roadways that carry the most traffic volume, such as Stroh Road, Hess Road, 20 Mile Road, Cottonwood Drive, Canterberry Parkway, Lincoln Avenue, Jordan Road, Pine Drive, Hilltop Road and Mainstreet.

School bus routes not already plowed under the second priority are our third priority and will be plowed when accumulation exceeds three inches. Per Town Council policy, local residential roads and cul-de-sacs that provide traffic flow within subdivisions and access to homes are not plowed unless 10 inches or more snow has fallen or if major drifting has occurred. Snow depths are determined by the National Weather Service reporting within the Town limits. When residential streets are plowed, only approximately an 18 to 20 foot-wide path will be cleared.

The following tips will help you prepare for inclement weather and allow the Town to do its job more quickly and efficiently:

For more information on the Town’s snow policy, call Public Works at 303.840.9546 or email publicworks@parkeronline.org. A map of the Town’s snow routes is available online at www.ParkerOnline.org/Snow-Priority-System.

Priority 1 – Arterials
Arterials provide a minimum transportation network which must be kept open to provide a roadway system covering the major traffic volume streets and providing access to police and fire stations. Arterials will be posted as snow routes and parking will be restricted as conditions warrant.

Priority 3 – Local Roads
Local roads and cul-de-sacs, which provide access to collectors and arterials, have low to medium traffic volumes. Local roads provide traffic flow within subdivisions and provide direct access to residences and private property. By Town Resolution, local roads and cul-de-sacs will not be plowed unless 10 inches or greater of snow has fallen or major drifting has occurred. School bus routes not already plowed under priority 2 are covered under priority 3.

State Highways
The Colorado Department of Transportation is responsible for snow operations and maintenance on State Highway 83 (South Parker Road).

Downtown Parker Wine Walk is back this summer … END_OF_DOCUMENT_TOKEN_TO_BE_REPLACED

Parker is home to quite a few gift shops offering … END_OF_DOCUMENT_TOKEN_TO_BE_REPLACED

The Parker Recreation Center has lots of great … END_OF_DOCUMENT_TOKEN_TO_BE_REPLACED